The vision of peace in marble and granite

The Paxmal was built by Karl Bickel as a temple of peace and a place of contemplation. Located on an alp in the Churfirsten high above Lake Walen, it takes visitors into the world of ideas of the Zurich-born artist.

During a long stay in the lung sanatorium in Walenstadtberg in 1913, he vowed to erect a monument to peace if he were cured of his severe tuberculosis.

In 1924 he began construction. Karl Bickel worked on his life's work for more than 25 years, most of which he accomplished himself.

As depicted on the mosaic walls of the Paxmal, the question of an ideal society was a central concern of Karl Bickel.

The human life cycle, the development of the individual and their contribution to society, the seasons, the harmony between man and nature: these themes form the center of Bickel's work.

Reachable by car and 10 minutes on foot or by postbus to Walenstadtberg and approx. 75 minutes on foot. (Editor's note: Be careful, the road to the Schrina-Hochrugg car park is quite narrow. Only for experienced mountain road drivers!)

Free visits possible from spring to autumn. Events are subject to approval. Guided tours to the Paxmal on request: info@museumbickel.ch 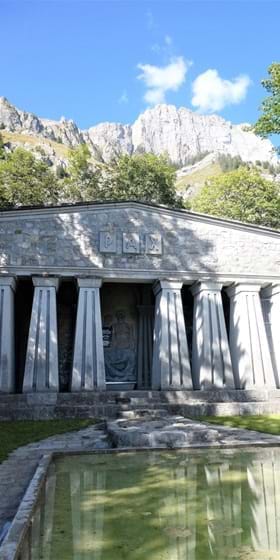